My darling husband loves everything I’ve ever knitted for him, including the four pairs of little fingerless mitts I made a few years ago. He has loved them so much, some, like these, are looking very tired. 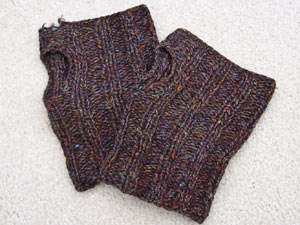 They’re quick knits, just tubes of 2 x 2 rib with slits for his thumbs, so when he said he wanted some new mitts for Christmas, I said, “Sure!” He especially wanted tan ones to match this scarf, which I knitted in 2008. 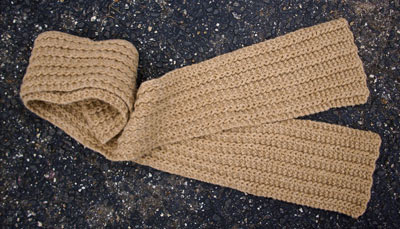 Tossing my wool stash, I was very surprised when I couldn’t find any more of the tan yarn! I guess that’s why he didn’t already have mitts to match.

I gathered all his hats, scarves and mitts to help us decide what color to choose in place of the missing tan and once I’d pulled out several coordinating ones, I called him in to choose his favorites. That may have been where I went wrong. I could have picked out the two yarns I liked most; I’m sure he would have been happy getting just those two pairs of new fingerless mitts.

Instead we had a wonderful time matching yarns to scarves, while I rooted through bin after bin of yarn. Before we knew it, his wish list had grown from two pairs of fingerless mitts to five pairs, three matching hats, a cowl and a scarf! He knows there’s No Way they’ll all be finished by this Christmas, maybe by his birthday in March, or next Christmas! lol.

The first pair of mitts will come from some of this charcoal wool yarn that I unraveled from a sweater some time ago. To quote the note in its Ziploc, “100% wool, 13 oz., bits 1 1/2”, ‘nough said. 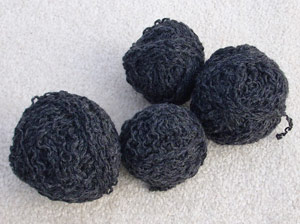 While I’m working on those, he’ll be unraveling this Shetland Wool sweater by Pendleton for its blue and green tweed yarn. It’s tag reminds me that I paid $4.99 for it at Savers in March.

It’s to become a hat, mitts and scarf set, which will add some color to his black winter coat. Notice how the hat and mitts will also coordinate with his striped scarf, which was part of another Savers haul in March.

Next on his list is a pair of mocha mitts, the closest we ever got to his request for tan mitts match his tan scarf. He says he “wouldn’t mind” a mocha cowl too. Not a problem, after all, cowls are alot faster than scarves! This incredibly soft 80%wool/20%alpaca yarn came from twin Eddie Bauer sweaters I found at Sal’s. 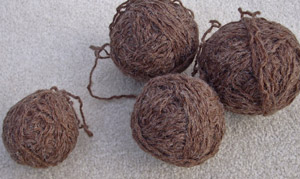 Now number four, well, I admit number four was all my idea. I’ve wanted to knit this self-striping sock yarn, Berroco Sox, 1421 De Montfort, (this link takes you to a page in Ravelry showing thirty-one projects, mostly socks, made from this yarn) into mitts and a beanie hat, ever since I pulled it from my yarn stash back in February! I imagine they’ll be quite spiffy, especially when worn with either his old charcoal or new blue/green scarf.

This fine marled teal/taupe yarn caught his eye. It’s the main color from a striped L. L. Bean wool sweater I unraveled in 2007. He’d like just a hat made of it, with some solid taupe stripes, please. (Patons Kroy Socks in color 55011, Linen)

They’ll probably be something like the stripes I knit into this beanie,

which was the second hat I ever knitted. I’ll need a double strand of the teal to match the weight of the sock yarn. If there’s enough teal left after the hat, (Weighing says there might be, and adding the taupe stripes will help assure it.) I’ll probably knit some matching mitts too, she said resignedly. lol.

2 Responses to Just a Couple Pairs of Fingerless Mitts, Please